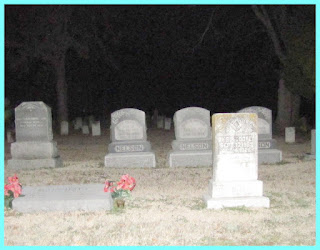 The Salem Presbyterian Church and Cemetery in Tennessee, is a place that we spent a lot of our time. We could not resist investigating it because the activity was so intense. You never really knew what you would find night after night, though we never left empty handed. This massive location is old, historic, and eerie. The church was originally formed inside a log cabin on the site in the 1800's and contains the unmarked graves of hundreds of  slaves and Indians. We feel that this could very well be the reason for the overwhelming amount of paranormal activity here. I don't know for sure, but I suspect that the owners finally added the memorial in 1980 to try to calm the spirits... We have experienced a little of everything here. Unusual lights that appear overhead or behind tombstones that shoot out into the night, disappearing just as quickly as they appeared. Receiving threats on our recorders, and experiencing extreme EMF spikes. The Trifield and ghost meters would read spikes non-stop for several minutes at a time and would then suddenly go dead... No pun intended. 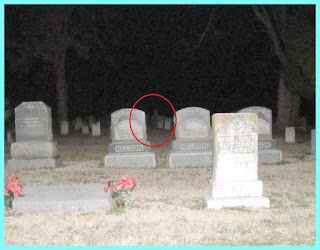 This was the kind of cemetery we enjoyed investigating because it seemed like something was always trying to communicate with us. But on this night, the graveyard seemed darker. There are lights on the church itself and of course the moon provides you with a little light, but we were already very familiar with the layout and how it felt in the dead of night. I don't have an explanation for why it seemed different then most nights, but as we started our journey into the graveyard I remember feeling as if something was just not right. I had an overwhelming sensation that someone else was there, watching us. I couldn't shake it, but decided to continue on and go as far as I could. Which this night, was not that far. This is a very deep cemetery and we usually explore from one end to the other, however this time I couldn't go beyond the first path. 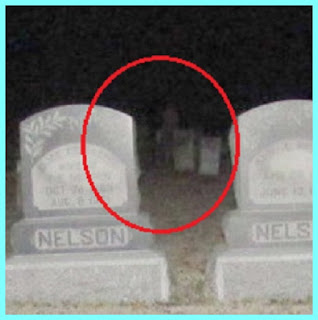 This image was captured while I was having these strange feelings and I've wondered for a long time if my intuition was right. Were we being watched? Maybe we were being followed? That night we obtained several impressive images, though this one has left me unnerved. You can only make out the vague outline of a body in the distance, and I've nicknamed him "The Walker." I would have loved to have learned his real name though I never came close to getting another image like this here.

Posted by Grave Spirits at 1:32 PM