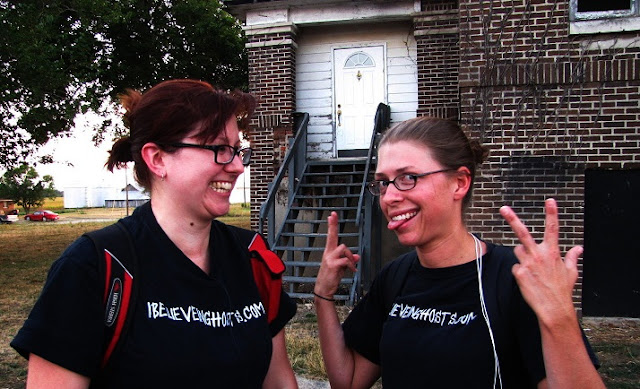 We set out early one Saturday morning in 2012 for our much awaited journey to Illinois. The destination was none other then the notorious Ashmore Estates. This location had been added to our list of must visit places since we started investigating the paranormal two years prior. And as you've probably already guessed by the picture, we were pretty excited to be here! 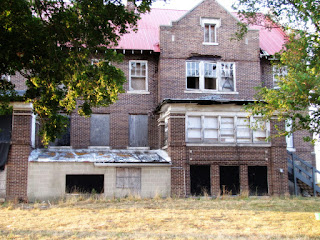 It seemed like we had been driving down the long dusty country road for hours. Every minute that passed by I grew increasingly more concerned that we had taken a wrong turn. One thing about visiting these old abandoned buildings that I've learned, they are sometimes hard to locate. It's also not likely that you 'll be able to stop and get directions, so be sure to pack a lunch and keep your navigational device fully charged! We finally found the huge old building and were shocked to discover that it looked like it could fall down any minute. We managed to arrive a little early too, and as we sat eating our broccoli salads, we witnessed the sun setting slowly behind the old manor. 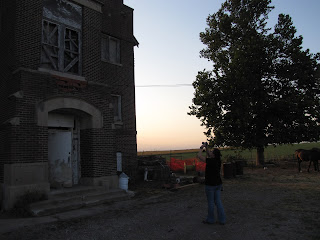 If I wasn't already familiar with the haunting history within the building, I would have become aware in this moment. The building, though eerie during the day, took on an ominous glow as the sun finally disappeared. The shards of broken glass in the windows appeared to be reflecting images of people, though none were inside. And the overwhelming feeling that you were not welcome would not dissipate. In fact I remember feeling as if I had been caught trespassing on private property. That feeling only became more intense as the shadows of the night grew darker. We prepared for our investigation no longer worried that this location would fail to live up to its claims. 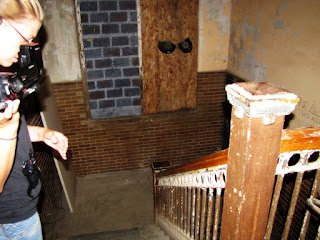 Moving into the dark building we were guided down the winding hallways by our friends from the tour group, though once the tour was over we were left to linger in the building to conduct our own investigation. Knowing the claims of previous investigators being touched and having experienced this for ourselves we decided to remain on the first floor and make contact using the Spirit box. This proved to be a good decision as the voices not only came through clear and concise but also directly answered our questions. As we attempted to leave the first floor we continued to receive voices, though this time they seemed to beg us to not leave. We heard "don't leave" and "help" as we tried to move on. Because of the extensive history at this location we hoped that any voices we would catch during our session would point us towards a residual haunting. Though the replies and comments seemed to imply that the spirits here were intelligent. 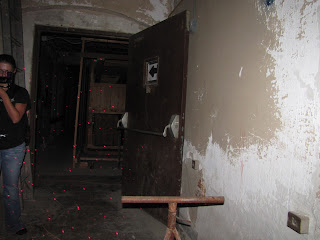 In another area of the manor we set up green and red laser grids facing opposite directions. We sat on the floor watching the lights along the walls. Like little stars filling up the night sky, it was calming sitting there looking at the beams of light illuminating the dark halls of the manor. Suddenly some type of a mass appeared within the lights, and the beams of light surged and sparkled. It reminded me of light piercing through water. The light beams glimmered and seemed to dance. We watched as a pattern formed in one corner of the room, moved away from us and crossed into the hall. It either passed right through the wall or just out of sight of the grid. Either way, it disappeared just as quickly as it had appeared. 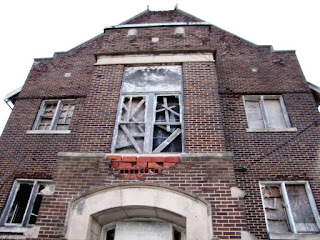 In January 2013, just 5 months after our successful visit to the estate, Ashmore was impaled by a fierce storm. Straight winds with speeds up to 100 miles per hour tore through the vast countryside, and nearly destroyed Ashmore Estates. The roof had been ripped clear off of the building and the support gables completely demolished. The director of Coles County deemed the building to be damaged beyond repair. When we learned about the destruction caused by those storms, we hoped that would aide in moving those unsettled ghosts on to a better place. So that they could finally find peace. We felt that we had encountered so many spirits here that just seemed misplaced or cast out. While our investigation that night was truly amazing, it was also sad realizing the number of souls that where left to linger inside this empty old building.  Ashmore Estates has received repairs over the past 4 years and is now currently back open for investigations, which leads me to believe the spirits are still there. Trapped...
Posted by Grave Spirits at 5:37 AM