Did I see my Doppelganger? 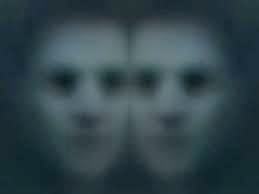 I've mentioned before how I've had otherworldly experiences as a child. This time I stepped even closer to something with a very frightening significance, all though I was completely unaware at the time. As a teenager I remember a time that I was woken abruptly from my sleep. I sat up in bed looking around the room, stopping only as my eyes met the mirror above my dresser. I was taken back as I realized that I did not completely recognize my reflection. It was my face however the skin that clung to my skull was noticeably pale. Deep, dark circles formed under my eyes and my hair, which is brown, now appeared to have changed to red... I was confused, it appeared to be my reflection, but everything was different about the image staring back at me. I felt detached from this image as if there where really two faces, my own and this stranger. I sat there, wiping at my eyes expecting the image to adjust or change. It had to be that my eyes where just playing tricks, right? But that cold, pale face just kept staring back at me with profound empty eyes. I slowly lowered myself back into bed, but I could not fall back to sleep. That night I laid there, awake with wonder. 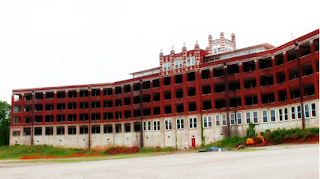 At the time this happened to me I had no way of understanding what may have taken place that night. It would be many years later before being introduced to the term doppelganger and even then I didn’t connect the two. By definition doppelganger means a look alike or "a double" of a living person. I first heard this term while investigating at Waverly Hills Sanatorium. Our senior tour guide, Michael, explained that many people had reported witnessing him wandering the empty halls. Refusing to speak to anyone, and ignoring when they called out for him. In fact, they had complained about his rude behavior. However Michael states the image they reported could not have been him as he was with other groups on different floors when these events took place. He firmly believes his doppelganger roams the halls of the sanatorium and stated that he is in no rush to meet his clone. Which is understandable given accounts of individuals over the years meeting their maker after these alleged encounters. The legend of the doppelganger is an old one, and believed to be a sign of bad luck. Some have referred to it as an unfortunate omen with a terrible outcome usually ending in death...

One famous account is that of Percy Bysshe Shelley, an English poet and husband to author Mary Shelley. Percy told Mary he had seen the figure of himself on the terrace of their home and it spoke to him asking "How long do you mean to be content?" Shelley reported that he had often seen these figures while ill, and one of these moments had even been witnessed by a friend, Jane Williams. Some months later, Percy drowned in the Bay of Spezia with no real known cause. So my understanding of a doppelganger was that they appear as full body apparitions, or a figure of one’s self and not something you should be excited about experiencing. A lot less like 5 Michael Keatons working hard to complete all your home improvement needs and more like your outer psyche giving you a heads up that life is about to turn south. I never thought of my ghostly mirror image as a doppelganger because it was a reflection from a mirror and not a figure standing there with me in the room. That was until I heard a story on a very popular podcast called Lore. If you haven’t heard this podcast yet, you should definitely check it out. It’s a collection of amazing true stories weaved into tales from folklore, and the eerie connections between the two being told in beautiful 30 minute segments. The particular story that gave me flashbacks of my own personal experience was that of non other than our 16th President, Abram Lincoln. 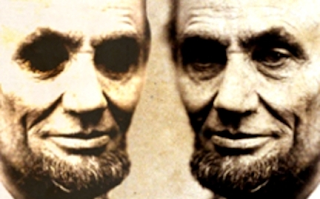 In November of 1860, he had returned home after a long day, tired, and in need of a short rest. He settled himself in an arm chair and closed his eyes for a few moments, then opened them for just a moment and in that glance saw a horrifying image in the mirror across from him. He later told his wife, that he recalled seeing two faces staring back at him. One face was very much like his own and the other was his face, but pale, almost sickly looking. His wife was understandably concerned. Having an Irish background she believed strongly in folklore and thought this to be a bad sign. Five years later, Lincoln was shot and killed while attending a play with his wife at the Ford Theatre. Hearing of an experience so much like my own, minus the death of course, got me thinking…Did I see my doppelganger? I had never thought that was how they worked, and most importantly (I say this while knocking on wood, I too have an Irish background) I’m still alive. My experience was around 20 years ago. I’m pretty sure if I died tomorrow no one would believe it was because I saw something unexplainable in a mirror as a teenager. So now I ask if it wasn’t my doppelganger, what could it have been?
Posted by Grave Spirits at 6:35 PM