Episode 45 - Get your creep on and talk to ghosts 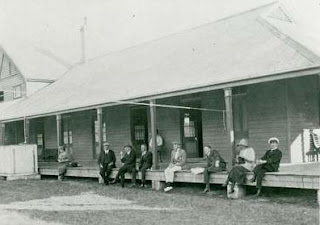 The Quarantine Station in Manly, Australia was established primarily to regulate the risk of disease imported through the migration of free and convicted Europeans, and arriving merchant ships into Sydney and the surrounding areas.
Up until the 1830's, the majority of ships requiring quarantine were convict transports ships, and since they were under government contract it was easy to enforce a hold at the port for quarantine.
But with an increase in free immigrant vessels entering into the harbor, a formal statutory regulation for quarantine became necessary, which angered many commercial captains.
However, local government felt they had a reasonable concerns since many of these people had just sailed four months at sea in close quarters under the worst of conditions.
Often, on these ships, there was a complete lack of checking for health issues before boarding the ship, let alone as they were at sea. There was insufficient concern with diet during the voyage, especially for the needs of children.
Captain and crew believed that for every three children where equal to one adult rations of food and sleeping space. So this led to an excessive number of children in cramped spaces, with inadequate food.
Legislation began to require all ships entering port to be screened for disease, and quarantined if necessary.
Original quarantine practice was to house the sick on board the vessel in which they arrived, meaning these commercial carriers would be held up in port until the sick passed away or where deemed well enough to enter into the country. Of course the captains of these ships complained and even asked for financial compensation for their time.


That form of quarantine was stopped in 1837. After that time, the sick were removed from their ship and housed ashore. This is what led to the building of the Quarantine Station at North Head in Manly.
If ships entering the port had any sick patients on board they were required to hoist a yellow flag before disembarking all passengers, not just the infected ones to the Quarantine Station. 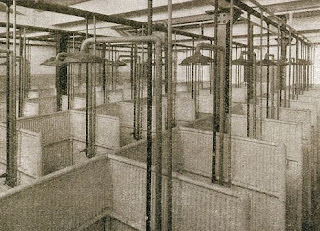 Here they were scrubbed down and washed in carbolic acid showers to kill any germs, fleas and lice. They had their luggage autoclaved and were kept away from the local Sydney residents for several weeks or months.
In 1853, a ship with 1,000 passengers arrived and needed to be quarantined at the station which was only designed to hold 150 people, so new buildings were added but many still had to camp in tents around the grounds.
To protect the virtue of the single female passengers, barracks were constructed surrounded by a double fence with a guard station between them, to prevent communication from others with the women.
Two other new buildings were built, as well, each to house 60 people at a time and included an area for dining.
The original burial ground was levelled and the grave stones removed to make room for the construction.
In total the Quarantine Station had three cemeteries throughout its history. The approximate location of the First Cemetery (Site IIIA1, c. 1837–1853), is at the junction of the Wharf and Hospital roads.
The Second Cemetery (Site L1, 1853-1881), is located east of the 3rd Class precinct. Three headstones remain in site and two more obscured by vegetation, and the outline of another two graves visible but there’s no markers. 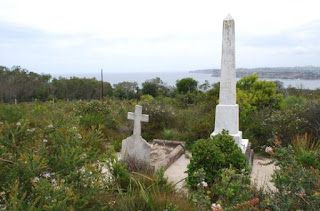 The Third Cemetery (Site VA1, 1881-1925), is within the School of Artillery, on Commonwealth property. Two hundred and forty one burials are registered, and the cemetery retains many headstones and markers, protected by a chain linked fence.
Some headstones from the First and Second cemeteries are on display within the grounds today.
Though after all that construction and leveling of graveyards, there was downturn in immigration during the economically stagnant period of the 1860's, between 1860 and 1879 only 138 immigrant vessels arrived, compared with the 410 between 1840 and 1859, and of these only 33 commercial ships and 29 merchant or naval vessels required cleansing at the Quarantine Station.
The issue of abandoning quarantine was raised again in 1882, and in his report on the issue the new Health Officer, C.H. Mackellar, dismissed the suggestion and even went a step further and said there should be more Quarantine Stations at other harbors, not just Sydney. He also requested that improvements be made to this station, which were approved and completed.
During the period of 1901 to 1940, Sydney and Melbourne had roughly similar numbers of immigrants (around 135,000 to 116,000 each). By 1958 there were 39 "first ports of entry" into Australia. 32 sea ports had staff capable of carrying out quarantine inspections, 10 ports were "landing places" for air entry; major quarantine stations with accommodation were established at 5 ports, and there were 3 minor quarantine stations at other Ports. 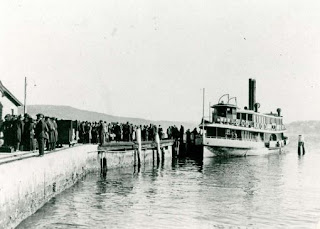 But with the impact of improved medical science, immunization, and quarantine procedures in the twentieth century the need for quarantine dramatically plummeted. The best example of that fact was after post WWII immigration Sydney received nearly 700,000 immigrants between 1946 and 1980, nearly double the number it had received between 1831 and 1940, yet only four ships were quarantined in that period.
In all, between 1828 and 1984 at least 580 vessels were quarantined at the Quarantine Station in Manly. More than 13,000 people were quarantined at the station of whom an estimated 572 died and were buried there.


This station was Australia’s longest continuously operating quarantine station.
The soft sandstone that the station sat on served as a permanent diary, as patients who had arrived from all corners of the world began carving unique messages and images into the surrounding rock.
Thousands of carved sandstone engravings record the diverse cultural and social backgrounds as well as varying experiences of the quarantined passengers.
The book, Stories from the Sandstone, is the culmination of a three-year project run by the Department of Archaeology at the University of Sydney, which integrated the work of archaeologists, historians and heritage practitioners to investigate these engravings left behind at the Quarantine Station.
The project uncovered countless journeys, many linked to Australia’s immigrant past, including stories from Scots, Finns and New Zealanders, alongside Chinese, Turkish and Indonesian arrivals.
Today the Quarantine Station is apart of the Sydney Harbor National Park and houses a hotel called the Q Station, with fine dining, water activities, and wildlife viewing.
However many don’t just visit the Q Station for the fine amenities and the view. Many curious paranormal seekers have heard the stories of haunting phenomena in the remaining buildings of the Quarantine Station and along the grounds for years, even centuries as the nurses that use to work at the Quarantine Station even reported seeing strange happenings. On one night shift, a nurse reported seeing a ghostly man with long ponytails wandering the wards and verandas. 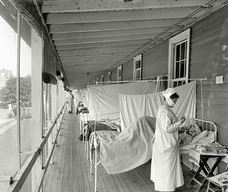 To this day, on-site park rangers have reported ghostly figures and lights in the unoccupied hospital wards, but upon investigation find no one there.
Other common tales include a ghostly girl, they call Mary-Anne, with blonde hair who likes to hold tourists hands and leads them around the pathways.
Sadly many ghost children have been seen at the Q Station, they often appear to other children.
But ghostly children aren’t the only spirits seen here.
Many employees, tour guides, and guest have reported seeing a shadow of a female spirit in a long dress that walks the grounds. One visitor on a tour at night swore she saw this female spirit but, of course, as she turned to get a better look no one was there.
The same visitor reported feeling a cranky male spirits present in the theater room she stated he made her feel very un-welcomed and the tour guide informed her that was a common report by many guest.
There seems to be multiple cranky spirits at the Quarantine Station as any have reported this uncomfortable feeling in a small house used as a display on the grounds and is featured on the nightly ghost tour.
More than one person reported the feeling of a tall man standing over them here in this small house and they became so uncomfortable they had to leave the house. Sounds have also been heard in here, like whispers and knocking sounds.
Many, many people have also reported a negative feeling in the shower block as well.
Some report seeing a dark male shadow, other report voices, orbs, footsteps, you name it this area of the station has it all. Many people are so uncomfortable in this room they can’t even walk through the whole building.
There’s a photo that has circulated the web of a very clear dark shadow of what you would assume is a male with a long coat on and a wide brimmed hat, they say there is another figure next to the man, possibly a child as it’s much smaller but it’s not as clear.
Ghost Hunters International actually investigated this location and they received several voices in this area which they hear in real time with their ears it was so loud and they even hear a door close while no one was near the door and they claimed it wasn’t windy at the time. 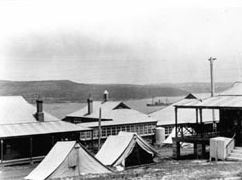 The hospital is another very active location on the grounds, people have reported voices, and some visitors feel sick or sharp pains while in the hospital but feel 100% better once they step outside.
Many call the Manly Quarantine Station the most haunted location in all of Australia, and it’s not hard to see why. The unfortunate souls who never got to leave, who traveled for so long in search of a new life but died from deadly diseases of the day which varied from the Bubonic plague, smallpox, cholera, tuberculosis, typhoid fever and Spanish influenza.
Their last few weeks, days or hours would have been spent in excruciating pain in the hospital ward, cut off from family members or have their religious last rites before they died for fear of spreading infection.
These are just a few of the reasons why many believe the site is such a hotspot for paranormal activity.


Q Station is working to redefine the full story of the Quarantine Station which was never thoroughly recorded. The real record of history is found in the lives of the ordinary people who lived it. So if you or anyone you know experienced time at the Quarantine Station as a quarantined person, you can go to their website and submit your story to be included in their collection of history on the location.
And if you have a paranormal story from the Q Station please go to any of our forms of social media and message us, that’s COTN_paranoral on Instagram and COTN paranormal on FB and Twitter, also you can email us at creaturesofthenightparanormal@gmail.com
Posted by Grave Spirits at 4:28 PM No comments: