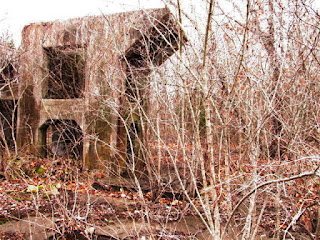 Back home, and by "back home" I mean Memphis TN, one of the places Wendy and I loved to investigate was hidden in the woods just North of Memphis. An eerie place that was once the location of an ammunition facility created for the benefit of preparing and storing munitions for World War II. The building was torn down years ago, though for what ever reason, it was never completely demolished. Partial rooms, and old racks for holding large bombs remained intact, as well as the old smoke stacks. The Smokestacks continued standing tall and ever visible from all points. Like a grim reminder to all that happened to look up and see them that there was once something of great importance out there. During the winter you could easily see the scattered remnants of stone and metal from the structure that formerly stood there. Any other season you'd find it buried beneath every species of poison Ivy, Oak and Sumac. 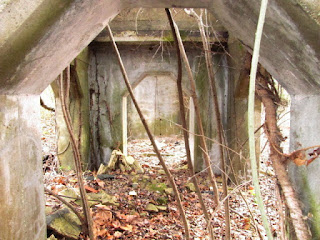 We would have to explore very cautiously in order to avoid a torturous ordeal after our investigation, and if the vegetation wasn't enough to keep you away, there were also the underground tunnel systems. The tunnels led to a small-scale use of underground munition stores. Even though the factory was now a crumbling shell of its former self, the underground tunnels endured. Through nothing was left to safeguard the scattered pits that would drop you down into the tunnels. Even the ground beneath you seemed to lightly give way as you walked along what would be the ceiling to the tunnels. If you chose to not keep an eye on your footing you might find yourself at the bottom of one of these holes with something broken and no easy way out. Ghost hunting can be dangerous on so many different levels. 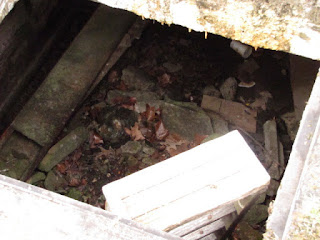 Now that I've properly set this up for you, I feel like I can finally tell you why this was one of our favorite places... Ever investigate somewhere, where the activity is just as loud and glaring during the day as it is at night? That is exactly how I identify this place, truly haunted. You walk along the paths through the woods to the ruined structure, all along hearing whispers. As you touch the rock formations or the old bomb racks you can feel the energy still pulsing through it. Creeping further into the woods you find the half moon bricked structure covered by centuries old vines. Though it is completely flooded and unable to explore, as you stand at the entrance you can hear the sounds of someone weeping. Who was it that was so affected here? Maybe they were brought here against their will? There are stories, of course, as with any small town. In this story there was a homeless man that murdered children and hid their bodies inside the underground tunnels. Whether or not that is true, I couldn't say. I've researched it and have only come across the legends. From our own investigation here, I can say that there is something otherworldly, and either still attached to it, or just lost. 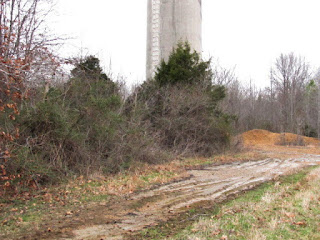 On one of our evening investigations, we felt that we had made contact with the spirit of a child. This was out in the open field rather then deep in the woods. The communication came in the form of a light being turned off and on to indicate yes or no, and we had come to the conclusion that the child was a male and was misplaced. As we interacted with the child spirit a solemn howl broke the silent night. It was loud enough for us to gauge its distance and felt safe to continue. It was only just a single howl at first, but the howling soon multiplied and it quickly became clear that a pack of coyotes were approaching us. We feared that they would be aggressive so we gathered everything and headed for our cars. Just as we crossed back through the gates that led us in, the howling stopped. Suddenly the vicious sounds that where right behind us were now no where in sight. The growling had gotten so close I could feel its breath as it neared us, yet as I turn to face it, it abruptly disappeared. This was one of the most bizarre occurrences I have ever experienced. Had there actually been coyotes chasing us, what stopped them from jumping us once we were outside of the field. 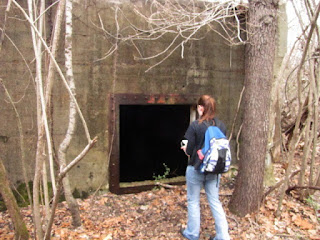 We paused, catching our breath we were left trying to accept that there was nothing chasing us. This was a paranormal force, a dark one. One that fooled us into thinking that snarling dogs were about to attack us. Was this connected to the little boy spirit that felt he couldn't leave? We went back several times trying to get answers to what we experienced. We left gifts for the child though never again making contact with him or even feeling the need to flee from an attack of wild dogs. Though as we revisited, the crying and the whispers could still be heard throughout the forest. So loudly I might add that you could hear them without the use of an amplifier. Or maybe we were just more in tune with it after that night. Either way, it saddens me to think that something remains out there alone. I wonder if it will ever be free...
Posted by Grave Spirits at 3:59 AM