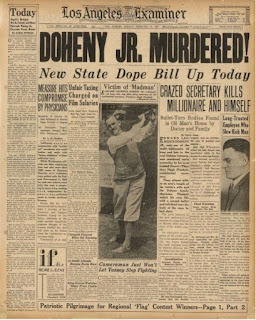 The Murder of Ned Doheny and Hugh Plunkett has remained a mystery for years, and the story is so interesting that many still ponder over it to this day. Ned and Hugh had been close friends, and for them both to have been found dead inside Ned's own house, left us with more questions then answers.

As the story goes, one night in February of 1929, Ned's longtime friend and assistant Theodore "Hugh" Plunkett used his key to let himself into Greystone Mansion. (This being the residence of Ned Doheny and his family.) Hugh made his way to one of Greystone's many spare bedrooms where he met with Ned behind a locked door. Ned's wife Lucy didn't think Hugh's visit was out of the ordinary as he was a trusted friend of the family. But when she heard a single gunshot from the spare bedroom where Hugh and Ned were meeting, everything changed.


Oddly enough, Lucy didn't call the police... Instead she called the family doctor. When the doctor arrived, he and Lucy made their way to the spare bedroom, where Hugh answered the door with a gun in his hand, and appeared to be extremely agitated. He quickly went back into the room, slamming and locking himself inside. Suddenly, there was another gunshot. Once they were able to get into the room, Lucy and the doctor found both men laying dead.

While all of this sounds simple enough, it is far from being over. The media was very quick to label the tragedy as a murder-suicide, and all though this seems to have been the picture that Lucy and the Doctor painted for police, the evidence seemed to point to a much more complex explanation. One large complicating factor is that Hugh appeared to have been shot from behind. If his death were a suicide, how could this be possible...

Lucy claims that she and the doctor had found the bodies around midnight. But for some reason, the police weren't called until 2:00 in the morning. What's more, when the police arrived, they found that both bodies had been moved and that the statements of the witnesses seemed rehearsed. Lucy claimed that the bodies were moved because the doctor had tried to revive the men. Though the police had their suspicions.After two days, the coroner ruled the case a murder-suicide and had decided it was due to Hugh Plunkett going temporarily insane.

Several alternate theories have popped up over the years. One theory claims that Ned was the one who called the doctor (not Lucy) to come calm Hugh down. Another theory is that Ned and Hugh were romantically involved and that perhaps either Ned killed himself, or that Lucy killed both of the men. While the case was closed, the mystery continues to shroud the Greystone deaths and the Greystone Mansion. And to this day many stories of restless spirits roaming the great halls of the mansion have been reported.

Some report seeing a man in a black suit, while others claim to see the ghost of Lucy Doheny. Others have even claimed to see the appearance of pooling blood just before it mysteriously vanishes. Whether you have a paranormal experience at this location or not, this Beverly Hills mansion remains home to one of the most shocking and truly unexplained murder mysteries of the last one hundred years. Definitely worth visiting if your in the Beverly Hills Area.
Posted by Grave Spirits at 4:18 AM